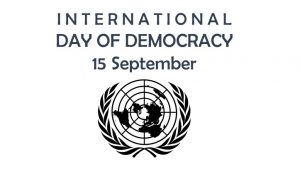 The International Day of Democracy owes its existence to the Universal Declaration on Democracy, which was adopted on September 15, 1997 by the Inter-Parliamentary Union (IPU). Inter-Parliamentary Union (IPU) is an international organisation of national parliaments.  The IPU suggested that the occasion be celebrated on September 15 to commemorate the adoption of Universal Declaration on Democracy 10 years prior. The first such celebration took place in 2008 .The International Day Of Democracy is an opportunity to review the state of democracy around the world He was an Indian civil engineer, statesman and the 19th Diwan of Mysore, serving from 1912 to 1919. He was the Chief Engineer of Krishna Raja Sagara dam in the north-west suburb of Mysuru city, and also served as one of the Chief Engineers of the flood protection system for the city of Hyderabad

The  is celebrated as Engineers' Day in India, Sri Lanka and Tanzania in his memory.