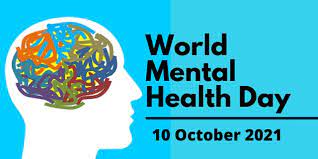 World Mental Health Day, celebrated every year on October 10, is aimed at raising awareness and spreading education about mental health issues across the globe.

It is also to raise awareness about the scale of suicide around the world and the role that each of us can play to help in preventing it.

This day is organised by the World Federation for Mental Health. It is also supported by WHO, the International Association for Suicide Prevention, and the United for Global Mental Health.

In pandemic times like never before as people of all age groups and occupations bear the brunt of the 'new normal'. Health and other frontline workers, students, people living alone, and those with pre-existing mental health conditions have been particularly affected.

People with mental health conditions are at higher risk of dying prematurely. Depression one of commonest mental health illness is one of the leading causes of disability while suicide is the second leading cause of death among 15-29-year-old, as per WHO