The International Day of Multilateralism and Diplomacy for Peace-

The International Day of Multilateralism and Diplomacy for Peace was established on 12 December, 2018  and was first observed on April 24, 2019.It preserves the values of multilateralism and international cooperation, which underpin the 2030 Agenda for Sustainable Development and to promote and support the three pillars of the UN - peace and security, development and human rights.Global issues such as climate change, geopolitical tensions, humanitarian and migratory crises are cross-cutting, implicating the values and interests of nations and necessitate collective attention and action. Technological advancement has also impacted the political and socio-economic landscape and inter-state relations.

The UN Charter and its principles of resolving disputes among countries through peaceful means. It acknowledges the use of multilateral decision-making and diplomacy in achieving peaceful resolutions to conflicts among nations.

The United Nations to observe the International Day in an appropriate manner and to disseminate the advantages of multilateralism and diplomacy for peace, including through educational and public awareness-raising activities. 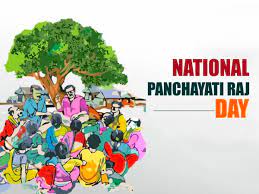 The day was first celebrated on April 24, 2010. The day marks the enactment of the 73rd amendment of the constitution in 1992. The powers of the grassroots were decentralised and the foundation of an institution called Panchayati Raj was laid. The Ministry of Panchayati Raj commemorates April 24 every year as the National Panchayati Raj Day.

Thus, the concept of Panchayati raj came into existence. In 1959, Rajasthan became the first state to implement the system in the country. The scheme was inaugurated by the first Prime Minister of India, the late Pandit Jawaharlal Nehru. Every year, various village level functions, seminars, and other events take place.

This year’s highlight is going to be the award functions that will recognise the best work of panchayats in the country. The award will be given in the following five categories: