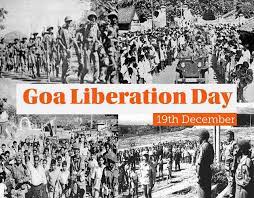 The Liberation Day of Goa is celebrated on 19 December annually. In 1961, on this date Goa was released from the Portuguese dominion after army operation and extended freedom movement. Goa remained 450 years of Portuguese rule. The year 2021 marks the 60 years of Goa’s independence.

The Portuguese colonised several parts of India in 1510 but by the end of the 19th-century Portuguese colonies in India were limited to Goa, Daman, Diu, Dadra, Nagar Haveli and Anjediva Island.

The Goa liberation movement, which sought to end Portuguese colonial rule in Goa, started off with small scale revolts. On August 15, 1947, when India gained its Independence, Goa was still under the Portuguese rule.

The Portuguese refused to give up their hold over Goa . Jawaharlal Nehru, decided that military intervention was the only option. The 36-hour military operation, conducted from December 18, 1961, was code-named ‘Operation Vijay’ meaning ‘Operation Victory,’ and involved attacks by the Indian Navy, Indian Air Force and Indian Army. In 1961, on this date Goa was released from the Portuguese dominion after army operation and extended freedom movement