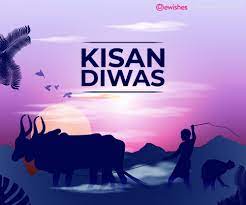 Kisan Divas or Farmer's Day in India or National Farmer's Day is celebrated on 23 December across the country to commemorate the birth anniversary of the former Prime Minister Chaudhary Charan Singh.

Farmers are the driving force of the country’s economy and deserve to be honored. This day aims to promote awareness of the importance of farmers and their valuable contribution to the overall social- and economic development of the nation.

From pre-independence to post-independence, Singh played a key role in the shaping of India’s agricultural sector by advocating and passing different bills for farmers’ reforms. The government of India decided, in the year 2001, to mark Singh’s birth anniversary as the day for celebrating Kisan Diwas.